So, yeah, my predictions for the playoff games were bad. Everyone makes mistakes and misjudgments though. I mean, at least I am not Stephen A. Smith where I predict 7 straight NBA Finals wrong, or I am Skip Bayless and never know what sport I am talking about. Anyway, the playoff games gave the College Football Playoff Selection Committee nightmares over how they picked the teams, so here is my take on why they were wrong, and how to solve these problems.

Why They Were Wrong

They didn’t pick Georgia. That’s why there were wrong. Georgia was the 2nd-best team in the SEC, and sure they couldn’t beat Alabama, but given another chance, they probably could. They are the only team in the country who prior to the National Championship could beat Alabama (Clemson being the #2 would play them in the Championship). Now, yes, last night made a bad reflection on that, but Georgia simply didn’t care about the fact that they were playing in the Sugar Bowl. Kinda like how in 2013, when Oklahoma played Alabama in the Sugar Bowl, and Alabama got smoked. It was because they simply didn’t care. They felt like they should’ve been in the National Championship, despite the memorable ‘Kick 6’ loss to Auburn in the Iron Bowl. Or even last year, when USC played Ohio State in the Cotton Bowl. USC felt that even with an 11-2 record, that their losses coming from strongly ranked teams would not be a huge deal, as they ended up winning the Pac-12. However, since they didn’t make the Playoff, they simply showed no desire to win against Ohio State. Should Georgia, like Alabama in 2013, or even USC last year, been in the Playoff? Well, I think yes, but then again, what do I know about how the College Football Playoff works?

Now look, let us be honest here, I should never have picked Notre Dame to beat Clemson. Notre Dame is an Independent, no conference whatsoever, so they do not have to play in a conference title game. I mean, Notre Dame was 12-0 going into last night, whereas every other team going into the playoff played 13. Why is this a big deal? Well, you could say that Notre Dame should’ve had all that extra time to prepare, but then again, they hadn’t played since the week before Conference Championship Weekend, which was November 24thagainst an unranked USC (Southern California, the real USC). Not having played for over a month really took a toll on the team. Ian Book and the offense looked sluggish, and the defense seemed scared of the moment. To me, Notre Dame’s best chance to be prepared for these moments is to join a conference. They should at least try to get more games against Big Ten opponents to get themselves more experience if they can’t agree to join a conference. Them being Independent for all sports except football is concerning to me considering that the hardest sport to get into a playoff in is football, with it only being 4 teams. Speaking of which…

The Playoff Should Be 8 Teams

There is no reason for just 4 teams. I mean seriously? A playoff of just 3 games? Not only were teams like Georgia deserving of making it this year but also teams such as Ohio State had a case to make the playoff. Teams like Michigan and UCF maybe aren’t as deserving, but hey, why not put them in the playoff and see what happens. Here is what the bracket would look like with 8 teams: 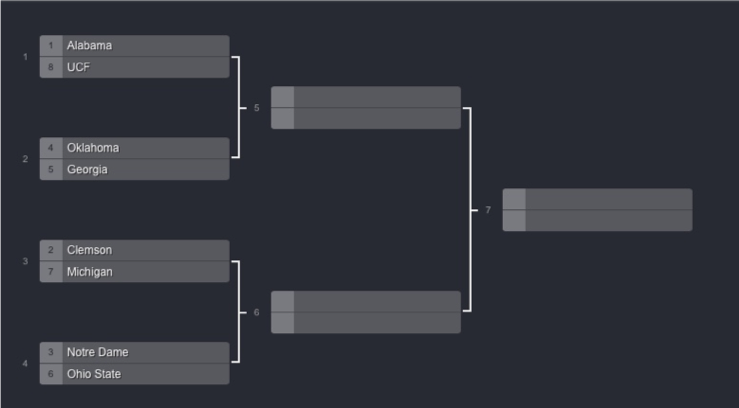 We can speculate on what the outcomes of these could be, but think about how exciting this would be? UCF finally gets Bama (as the self-proclaimed ‘National Champions’ have always wanted), OU and Georgia have a rematch from last year’s classic Playoff game, and Ohio State and Michigan can have the chance to prove to the world that the Big Ten is worthy of a playoff spot. All in all, it would just create a more exciting atmosphere and weeks of anticipation and gameplay.

Clemson and Alabama play for the 4thconsecutive Playoff, and 3 of the past 4 National Championship Games have had this matchup. Right now, the series is 3-1 in favor of Alabama, yet this Clemson team is showing flashes of that 2017 National Championship team that beat Alabama on the last play of the game. The offense, much like this year, is very balanced with Etienne and Lawrence, as they did with Wayne Gallman and Deshaun Watson in the 2017 run. The defense is probably better than it was in 2017, and the receiving core is also very similar. That being said, Alabama’s offense is much better through the air than it was last time, with Tua’s ability to read defenses and extend plays being much better than that of Jalen Hurts, then and now.

I would put my money on Clemson. Trevor Lawrence’s deep ball ability, coupled with his ability to extend plays with his feet and accuracy, he could cause them problems, probably more than even Kyler Murray did. Murray is the type of QB that Alabama can live with because they are more than willing to let a QB of his size, speed, and skillset, beat them with his legs. Sure, he had 309 yards passing, but he also had 108 rushing. Lawrence could get between 350 and 400, and he has a much better receiving core than Murray does with Oklahoma. The deep-ball passing game has hurt Alabama against top teams, most notably against Georgia, when Jake Fromm let it fly all night and burned the Crimson Tide secondary for most of the night. Also unlike Oklahoma, Clemson has a very strong defense, starting with the front seven, led by Kendall Joseph and Christian Wilkins, who should be able to get to Tua with questions of his health, as well as the pass protection of Tua over the past few weeks. It’ll be a much more defensive game and will have a Georgia-Alabama SEC Championship feel to it, but at the end of the day, it is what college football wants, the two best teams going at it on the gridiron. Last year, Clemson got swamped, 24-7, by an Alabama team that was the 4thseed and had no business being in the Playoff, considering they didn’t even win the SEC. However, history has shown that the lower seeded team has won every time. Oh, and Drake repped Alabama, and no team has ever won when Drake reps them. I got Clemson with the upset victory.

Final Result: Clemson for the win.